„Home is where my suitcase is“ – Photographer Katarina Šoškić in portrait 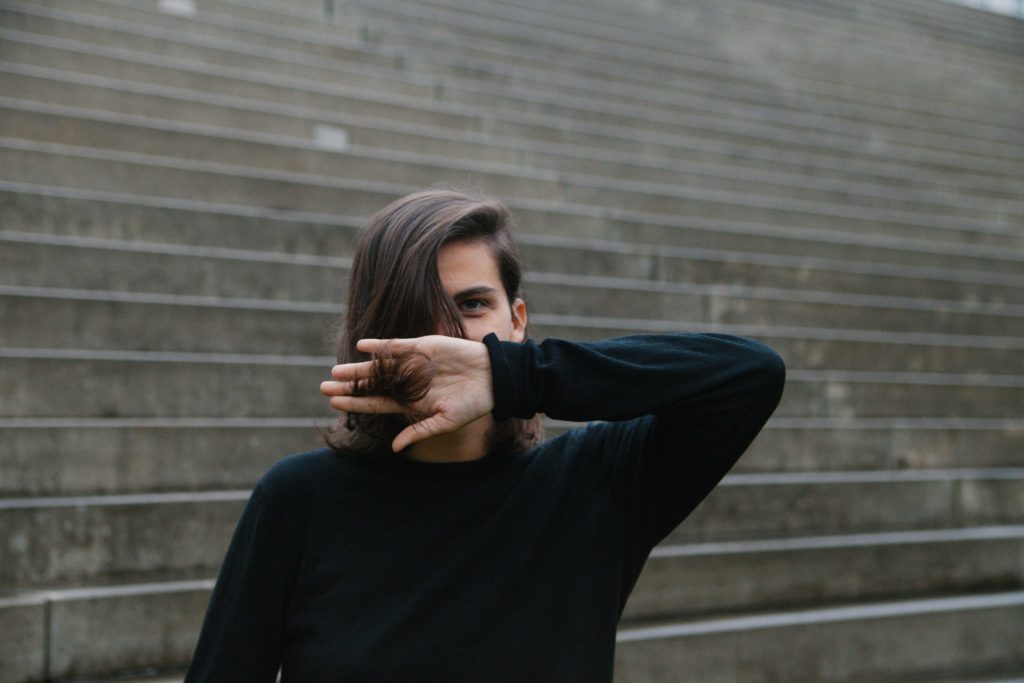 Katarina shot the campaign for the 2016 Take-Festival. Christian Schlager from studio VIE, the art director of the whole campaign, asked her to do it because he knew her style would fit to a young fashion festival like Take. They met during their studies at die Angewandte (University of Applied Arts) and I met Katarina for a long talk about techno, love and pictures.

Katarina is 33 and studied Graphic Design in Vienna, where she lived for seven years. When I met her for lunch at Salon Plafond inside MAK, she had just come from an art residency in Madeira, where she designed and edited an artist book with the input of the whole group in three days. Before that she had a residency in Paris where she was writing a text in form of a letter to a person that she hasn’t met, to be followed with detective pictures from her life in Paris. Asked where she lives she answered „I don’t know where I live“. She actually lives between Belgrade and Vienna, with the emphasis on „between“: arriving and departing are very important for a woman, who has lived out of her suitcase for many years. Because she knows how exhausting such a ‘to and fro’ life can be and how fast it could turn into a „model of surviving“ she has considered settling in Belgrade multiple times. Whilst she loves Belgrade, she does admit that living there for a longer period of time would be difficult: most of the things she does are not needed or appreciated there. All these reasons made her leave some years ago. That is why she returns to Vienna frequently and stays connected to the other cities in Europe.

Kata, as her friends call her, started taking pictures in her early twenties in Serbia, where – relating to the socialist past of Yugoslavia – shooting with old Russian cameras was quite popular. At a certain point she noticed that she didn’t care so much about the aesthetics of it, but more about what the image could say. These two possibilities of photography became clear to her. „It was a struggle.“ She accepted that she could do both options well and that there is no need to fulfill both things in one. People know that and that’s why she works with people who like her calm and human style in fashion photography, which comes from her liking for analogue method. She was drawn to analogue photography by its slowness. „I am more focused and more familiar. Fewer people can interrupt the process.“

Garments as cover. The campaign shooting

Dina Lucia Weiss: Let’s talk about your shooting for Take-Festival. The models in your pictures are wearing a leather jacket from Hvala Ilija and a jacket from MOTO DJALI. But they are not really wearing them – Can you say anything about this?

Katarina Šoškić: „I love people. For me its always interesting to photograph people. The word ‚love‘ sounds very romantic, but I am curious about what the situations brings. At the shooting with Ann (Kuen) and Philipp (Pauland) I liked the shapes. I liked the colors. And I liked how the faces of Ann and Philipp fitted together. They looked a bit like brother and sister.“

Katarina played around with pieces from Hvala Ilija and MOTO DJALI – and it was irrelevant what kind of garment it was – as things they needed in order „to cover, to hide or even protect themselves“. That the models are half naked does not imply sexualization. „I don’t want a girl who is sexy and a boy who is macho. I don’t want a girl or a boy, neither.“ In her pictures for Take-Festival one can see, rather, the human touch. There is a sense of the calmness of the situation, where the two persons start to merge. During the shooting Katarina forgot time and place. „I really enjoyed it. That hadn’t happened before, at least not in this kind of set situation.“ When they were finished, Vienna was covered in snow. 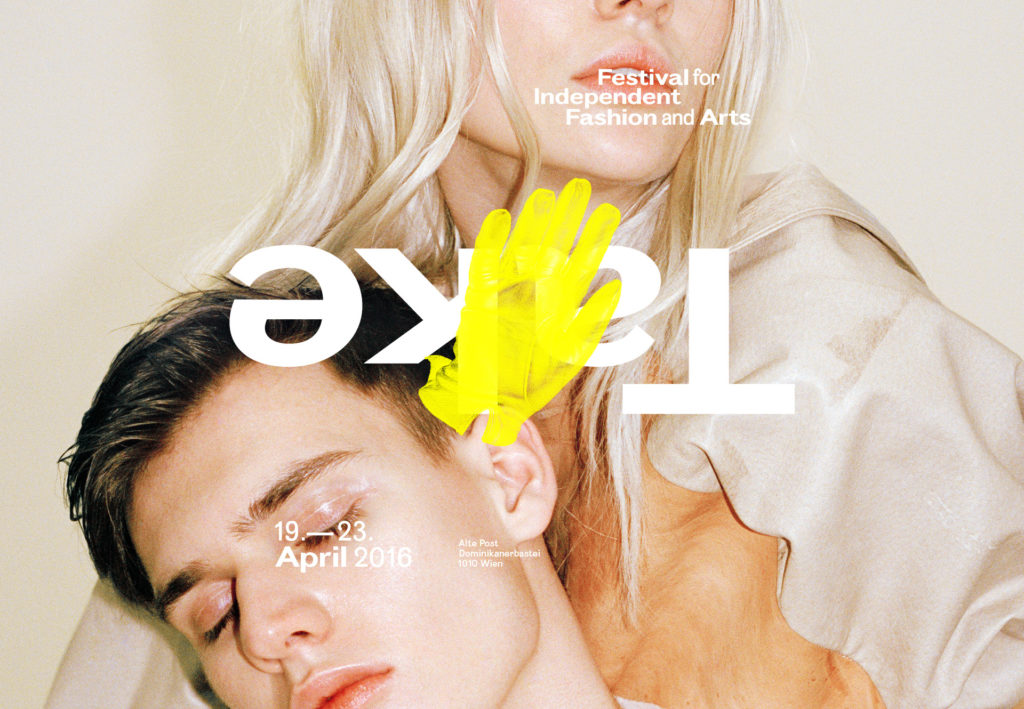 „Style talks to us all the time“

Dina Lucia Weiss: You are an artist. Do you think fashion plays an important role among artists?

Katarina Šoškić: Through clothes we have a chance to express ourselves. It is a multilayered channel of communication and this possibility of infinite amounts of information and disinformation that one transmits is really exciting. I like self-irony and I love to play with tiny, almost invisible twists where you suddenly notice that something is ‘wrong’. For me the garments seemed to help me stay reserved, but more often I feel joy noticing how it let pieces of me out. I think that is where style is.

Fashion is something else, it is industry, it is machinery. It makes sense for those involved with it professionally, and I understand that. But hyping it without questioning the reality it reproduces can be dangerous in my opinion.

Dina Lucia Weiss: Where do you buy your clothes?

Katarina Šoškić: Very often I buy secondhand. Also people give me clothes. Things come to me. And then I have these uniforms: three of the same outfit. I prefer playing it safe. I don’t play with fashion because I don’t like deciding what to wear every day. When people don’t know my name they ask: Is this the one in the jeans? Well, looks like I am the jeans-girl.

I started wearing colours in Taiwan. But I keep it simple. Also a garment that is obviously for women is weird for me. I never wear anything made especially for girls. Gendering is a weird category for me. It’s part of my nature that I am not gendered.

„In praise of love“

Dina Lucia Weiss: You seem to be interested in psychology and philosophy. What are you reading at the moment?

Katarina Šoškić: At the moment I am reading „The Tourist“ by Dean MacCannell on my iPad, because its important for my research on mass tourism. Before that, I read Alain Badious interview „In praise of love“ (Originaltitel: L’eloge a l’amour, 2009; dt. Lob der Liebe) for a second time. It moved me when I read it in Paris this summer, and now again with the new perspective of a person being in love finally, as I am now.

I read a lot. The grants I received in the last two years allowed me the privilege of spending more time reading and contemplating. Usually, you have to fight and search for a job and find a way to make a living, and for the first time I was given this chance to not be worried about anything and to do what I wanted to do: this opened up a new realm of responsibility to not complain. In this way, someone trusts you. That’s really a privilege. Paris was really important in these terms: I spent my days walking and reading and writing. I didn’t take photos. So whatever happened that I used in the book that I made afterwards was not really planned. I just put in the photos from my iPad that follow the story I actually wrote. That was the first time I did it that way. 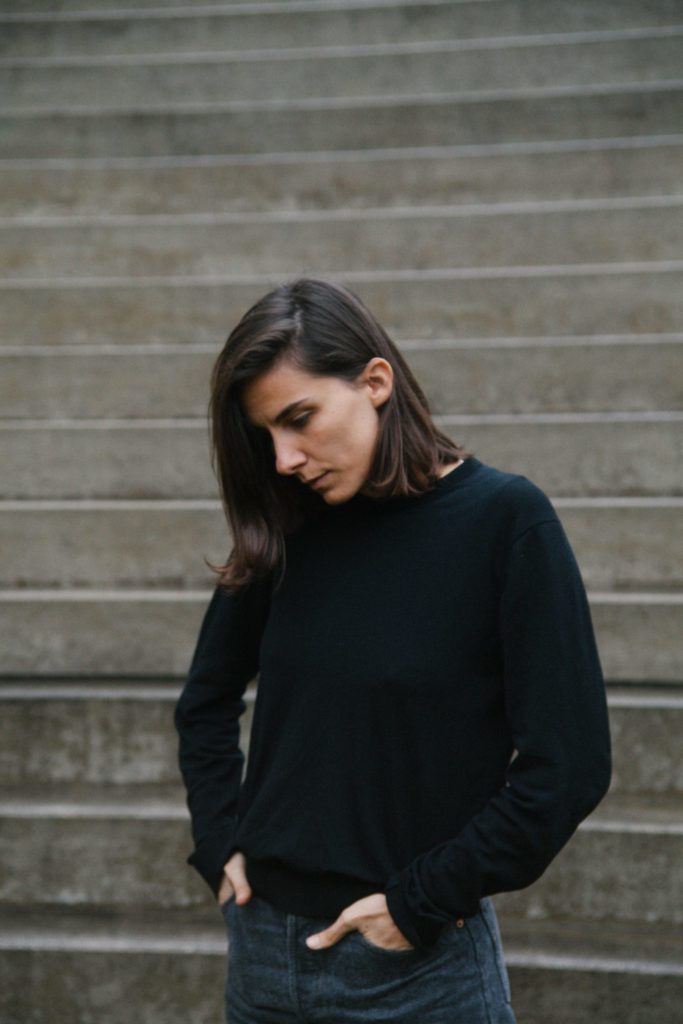 Katarina Šoškić. „The idea of capturing the truth in a photo is a weird idea.“ © Dina Lucia Weiss

Dina Lucia Weiss: So you read a lot and you travel a lot. Is that right?

Katarina Šoškić: Absolutely. Travelling is really important for me. I think it defines me. At least it helped me a lot in understanding myself in the last few years.

Vienna and the darkness of a techno club

Dina Lucia Weiss: Do you have some favorite places in Vienna?

Katarina Šoškić: I have this one place where I go from time to time –  it’s the big carousel in Prater. When I lived in Vienna it was kind of a ritual for me. I like to walk – I try to walk as much as I can. I like the Stadthalle for swimming. And the Danube in summer is such a beautiful thing. Also Techno is really important to me. I was a clubber for decades I guess. I like the darkness of the techno club. I have this history of clubbing… club culture was really important in Belgrade. It was a part of my life equal to my daily life. But I stopped clubbing at one point. Other than that, I often meet with my Serbian gang here in Vienna at zweitbester. 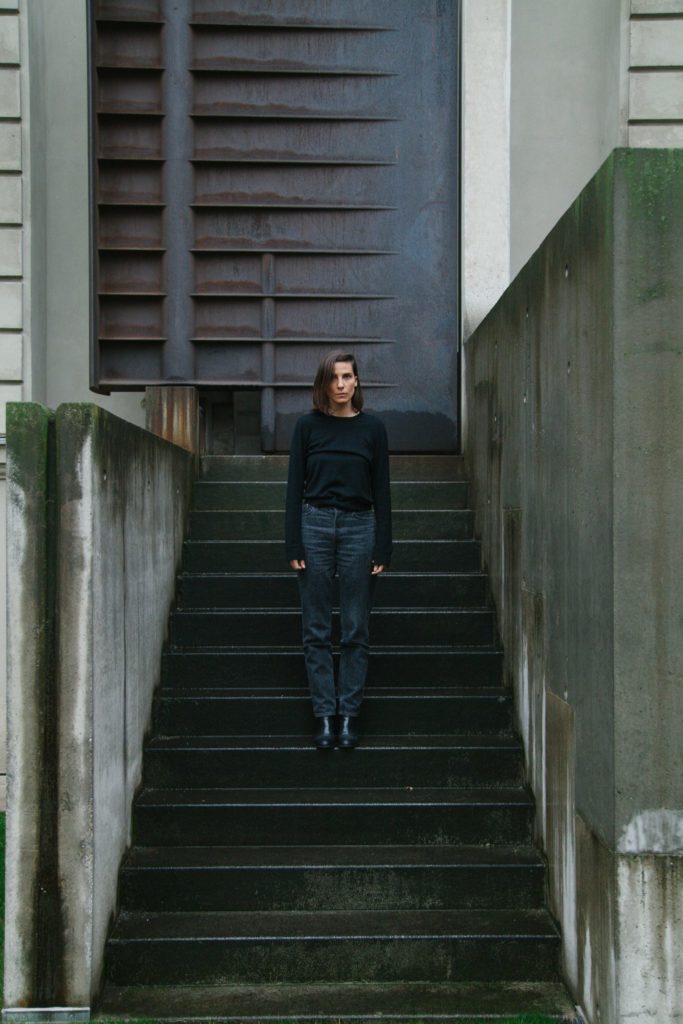 Katarina Šoškić loves the colors grey and green. She is wearing grey jeans and a black pullover. © Dina Lucia Weiss 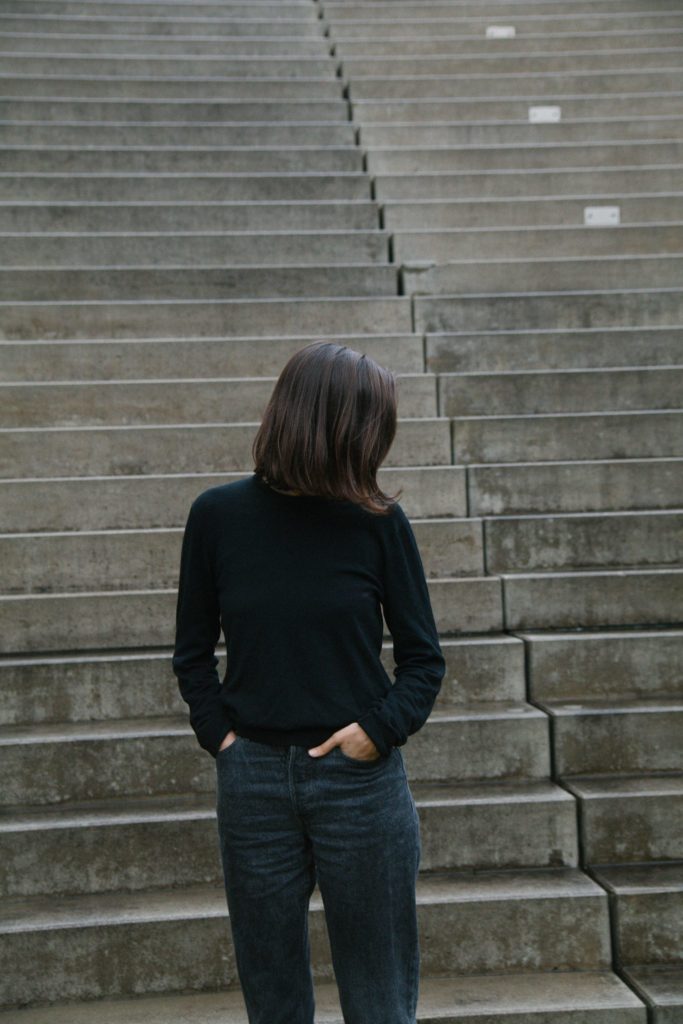 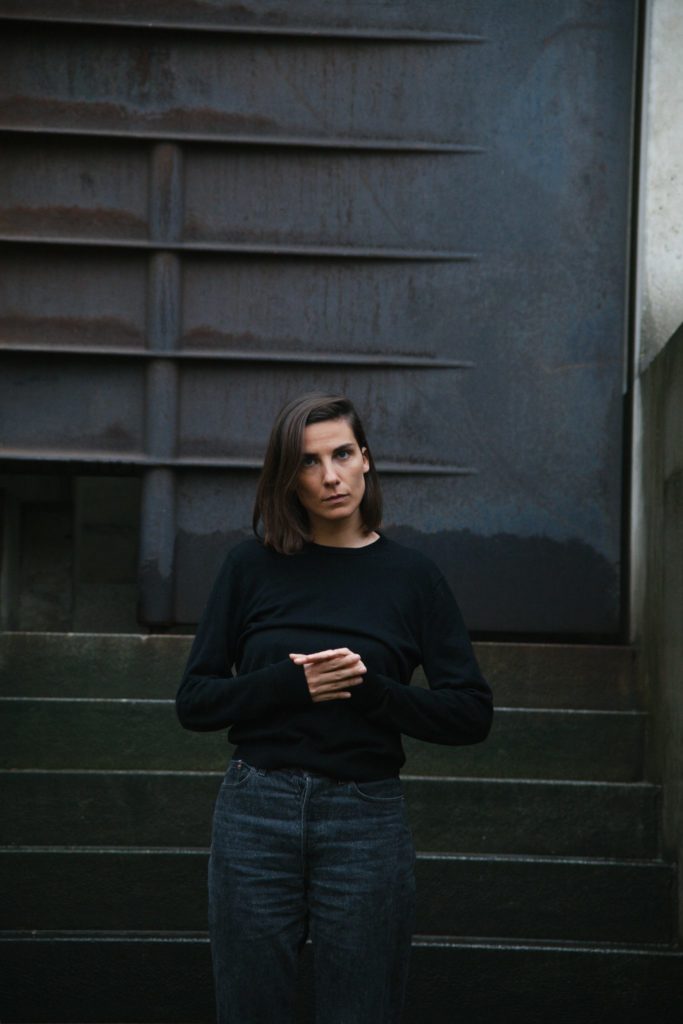 In Vienna there are places where I feel good and others where I don’t … just the area. One example is the small passage at the Sankt-Ulrichs-Platz in the seventh district. For some reason whenever I am there I feel so happy. It’s crazy. I love going through that passage. There is no reason to be there, it’s just if I have a chance to pass that way I’ll pass that way. Someone told me prostitutes were once common place, maybe I feel that clash which was happening around the church … (laughing)

If you are interested in meeting Katarina after this personal interview in person, you are invited to come to Hotel am Brilliantengrund on March 19, where she will be talking about her work alongside presentations from three female designers. After that she will be in Belgrade and will try to settle down a bit. But she’ll be back. Back to Vienna where she can work as she wishes.

See more of Katarina Šoškić´s work below and here.